Shh…Diam!‘s rhythm guitarist Yon is recovering from a cold. This makes her voice husky, raspy, and downright plaintive when she gets excited or jokingly defensive, and it is the best sound ever. Farah, lead singer, guitarist, and also Yon’s cousin, says her voice “is like pre-pubescent Hanson,” and she’s kind of right.

We had been invited to Yon’s pleasantly ramshackle loft of sorts — its corners filled with her finds from the As Is corner of IKEA, where she works. The table we all end up sitting around is made from an old door. The drinks she serves us — throughout the afternoon Yon proves herself an impeccable hostess — come from a styrofoam chest with too-large a bag of ice in it. The whole interview was like an after-school afternoon spent lazing around and sitting in on a friend’s band practice, watching everyone shoot the shit and riff off each other. It was kind of everything I ever wanted but never got to have in my MTV-and-Nickelodeon-fueled-traditional-Malaysian-schooling experience. It was also very telling of how Shh…Diam! worked as a band (if their tongue-in-cheek name didn’t already tip you off).

Now, there are musicians who take themselves seriously, who regard their musicianship as a skill to be endlessly honed and mastered, who see their talents as a way to build careers and a living, who are articulate and driven about their passions because they spend so much time on it as not just what they do, but also who they are. These musicians are usually lovely and awesome people — we should know, as we’ve interviewed a couple of them before.

Shh…Diam! are just as lovely and awesome, but they are not those musicians. The foursome — journalist Farah Saad, games designer Jellene Khoh, translator Yon (Khairunnisa Mohd Nasir) and marketing maestro Yoyo (Nurul Shuhadah Mohamed) — are certainly talented and take pride in the music they make together. They also put on a great show. But the last thing any of them do is take themselves at all seriously, which made them some of the most fun and playful interview subjects I’ve had the privilege of speaking to. We spent one rainy Saturday with three members of the band (Yoyo was unfortunately working) to find out a bit more about how it all came together.

The band started from an impulsive outburst by Farah; in 2009, local poet and performer Elaine Foster was having an event and looking for other performers. Farah volunteered her band…except she wasn’t actually in a band. Yet. Yon was quickly recruited, along with Farah’s colleague and an old schoolmate, and two weeks later they were performing covers at a rooftop party.

Nearly four years on, they’re still together, although they’ve gone through some member changes before settling on their current incarnation with Jellene on drums and Yoyo on bass. “We’ve lost a lot of our band members to the institution of marriage,” according to Farah.

Why are you in this band together — how did your interest in music start?

Yon: Before we decided to have a band, Farah was a [solo] singer-songwriter. Go home and Google Dugong and Bodoh.
Farah: She hates my singer-songwriter background, but she knows all my songs. I used to fantasize about being in a band when I was younger, with my brother. Pretend that we were in a rock band.
Yon: They say if you play music you get girls. But [that’s] not so true. I hope this coming year, it will happen lah, it’ll bring me girls not guys.
Jellene: I’ve been playing music since I was very very young, because my dad sent me to music classes as a kid. And then after that I played drums in church and then I studied music in college.

Farah: Before she joined the band, Yon listened to a lot of Indonesian pop music. Peter Pan —
Yon: I suka Dewa!
Farah: She actually made us cover one of their songs!

Yon: (semi sheepishly) Munajat Cinta.
All: (riotous laughter)
Jellene: See? You can see her agenda straight away! She wants to pikat-pikat.
Farah: You use us to get girls! Now, I listen to a lot of metal.
Yon: Tipu gila! Kau suka lagu hipster, macam Ra Ra Riot!
Jellene: You fucking 80s lah you!
Farah: Yeah, but right now I’m listening to a lot of metal!
Yon: Okay, well right now I’m listening to The Doors.
Jellene: I listen to a lot of music. I grew up on 90’s grunge music, Nirvana, Foo Fighters, Pearl Jam. After that I went on to death metal – Meshuggah, Cradle of Filth, Korn. Then I went I got into college, I got into jazz, Miles Davis, John Coltrane, big time jazz people. Then I got into smooth jazz, funk jazz like Fourplay —
Farah: The Sims 1 soundtrack.
Jellene: YES! That’s awesome shit. These days I listen to trip-hop. A bit more electronic. 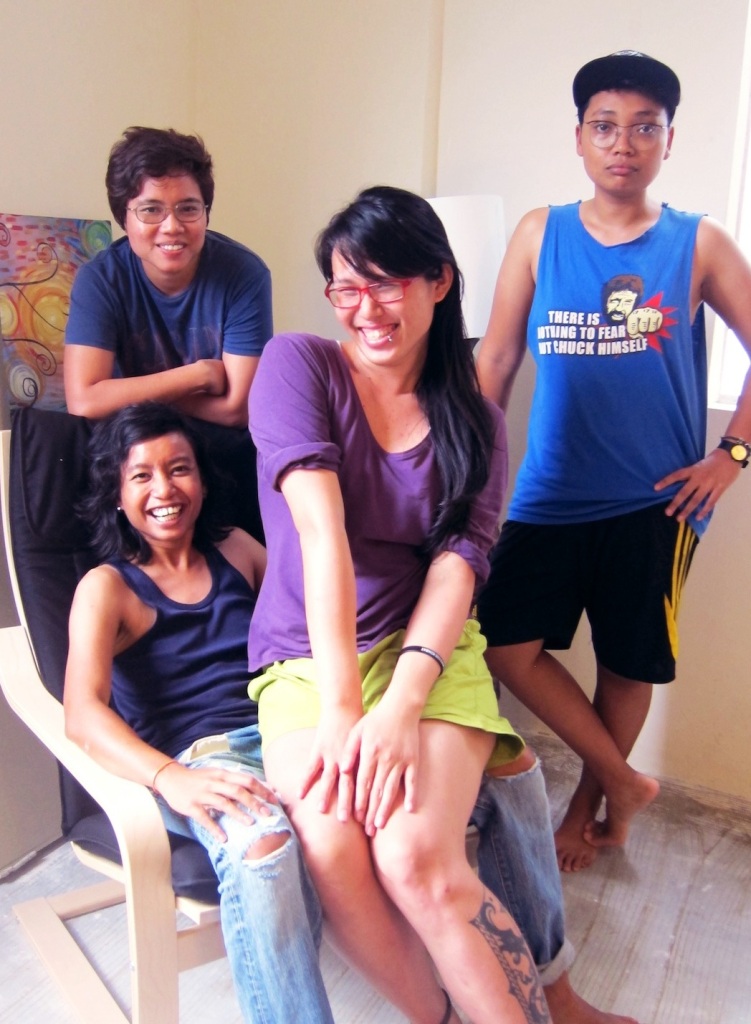 How did Jellene and Yoyo get involved with the band after the other two original members left?

Jellene: I dropped down from heaven.
Yon: I was praying, because our old drummer left, macam tu je. So I prayed (cups hands together) and then suddenly she fell into my hands.
Jellene: I actually didn’t know anybody in the band beforehand. I had a friend who was Farah’s colleague, who told me that Shh…Diam! needed a drummer, and I thought, okay, I’m kind of free. So we met up, and then we jammed, right, that night?
Farah: Yeah. And Yoyo was from this band called The Pips before. She came in as a temporary replacement for our old bassist and then she became permanent.

How did you figure out they’d be right for the band? What are the characteristics you need to have to join Shh…Diam!?

Yon: You must be good looking to be in this band.
Farah: Must wear spectacles.
Yon: Must have a martial arts background.
Farah: And it has to be an exotic sounding one like Krav Maga. *which is what Jellene practices

Right, so everyone in the band is an amazing catch, and you guys all get along so well. Any intra-band relationships happening?

It was delightful to see the banter and camaraderie they shared, their friends chipping in from the sidelines, and all of them building on each others’ jokes. This collaborative process seems to hint at how they work together as a band, with Farah calling their music-making process “anarchy.”

Farah: Whoever has a riff or an idea can bring it up.
Jellene: Even with [the] songwriting, it’s like that.
Farah: Usually whatever idea we have, we bounce it off Jellene first, because she’s the one with the musical background.
Jellene: I’m like the band arranger. Also [in the band], anybody who feels like we need to practice, we’ll just say so.
Farah: We put it on our band Facebook meeting page.

The thing with Shh…Diam! that we observed was that their lax attitudes encouraged a very high level of comfort with one another, and a lack of fear when it came to playing around and trying new things. As much as Farah liked to play down their confidence in their own abilities — “We used to practice a lot, because we used to really suck. Like, horrible, terrible, I would boo myself off the stage. That was how bad we were before.” — it was clear when they picked up their instruments and played together that their energy as friends informed the energy of their songs, resulting in a riotous chaotic good time.

In 2010 they put out a CD of four songs called “Wi-Five”, and they’re working to increase their repertoire of songs — Yon: “We only have 9 songs.” Farah: “No! Dah lebih! 10 songs.” — and put out another CD soon. In the spirit of their cobbled-together beginnings, Shh…Diam! seems to enjoy always being a work in progress.

Farah: We still mess around with those [Wi-Five] songs. Every show is different.
Jellene: Because we get bored — it gets boring if you keep playing the same thing.
Farah: So [us playing] live is completely different from what you hear on the CD. Our songs cover a wide range of topics.
Yon: The latest one is about a girl from China, from Guangzhou. We took all the Whatsapp audio that she had sent to me, and made a song out of it.
Farah: When [Yon] was playing the audio for me, I was like “Okay, that sounds so cool! We should set it to music!”

At the interview itself they improvised on the song as we watched, Farah and Yon teaching it to Jellene, who then added a wicked bit of lion dance music that ended up in the live version of “Guangzhou Girls” they played at their January 18th performance at The Bearded Lady cafe in Subang. With their fake moustaches and beards (in honour of the cafe’s opening), they grinned at each other over their instruments, delighted with themselves.

The only thing left was to ask what Shh…Diam!‘s future plans were, if they had any, although we could imagine it would likely involve staying friends, keeping on making music together, and continuing being awesome.

Yon: There’s no rules and regulations when it comes to our band, there’s no aim, no target, no objective, want to conquer the world ke, apa ke…
Farah: But we do want to join the Illuminati — the Malaysia branch.

To keep up with Shh…Diam!, you can like them on Facebook. You can also listen to two of their songs off Wi-Five here.