Once upon a time, several, several years ago – in the winding down/winding up years while I attended a private college but before I went to university abroad – you would have found me watching TV. In those three years, you would have found me sprawled in front of the family television, in an area of the house long reconfigured and now folded into a new shape.

Idle, idle, you would have seen me flicking through the many channels, devouring the commercials and banality like so many empty calories. I used to watch this one channel that was nestled in between the large, empty expanse of news and the dull lakes of nothing that was public TV. The channel featured a show that had two hosts – a woman and a man – who I discovered, in time, were dating. She was pixie-small and blonde and a large smiler; he had puppy eyes, a heart-shaped face and a boyish haircut. They had bite-sized, palatable surnames and they were close to becoming married (I had read).

I googled them and started finding their imprints online, their Twitter @replies, their abandoned blogs and updated accounts, like breaking into a lived-in apartment, recently emptied. It was like getting new clothes for my Barbies. I could suddenly swap out the constructed, tailored version of these people routinely doing their jobs as television presenters, and see what they were like “with their hair down”, “off-camera”, “IRL”.

I found an album, an archive of pictures from her phone, streamed and kept online via some machination between her and her service provider. The photos were mundane and therefore, painfully, abstractly intimate. There were photos of her and her co-host, her boyfriend. There were photos of them kissing, pages deep into the album. The number of pages and photos was not insignificant, and I went through them all. It was a quiet sinkhole of my time and attention, a room I occupied that only I knew about. No one else knew that I went in there, and in the larger scheme of how I spent my day, even I would routinely forget.

They broke up after some time and I was quietly sad in the smallest of ways. The ripple of a larger, more devastating wave had touched my finger dipped in the water, several oceans away. The account stayed up for at least another year. She went on to date someone else, and his photos started appearing on the account – the top layer of her new trifle life. I kept expecting the smushed noses and puckered lips of the earlier pages to slowly dissolve, to be plucked gently from where they sat and deposited with care somewhere I couldn’t see. That never came to pass and so I kept looking at these pictures, referring to them like a dog-eared page in a much-read book. The unchanging magazines in my secret waiting room, experiencing mutual stasis with these perfect strangers.

Eventually the account disappeared, swallowed by changing servers. Eventually she broke up with the other man. Eventually I got too busy to care as much.

Somewhere around this time, in the nebulous timeline of my exploration of the Internet, I started obsessively reading one specific website. I was an 18-year-old Malaysian girl living at home, devouring the written lives of cherry-picked darlings in New York, a place I had never been to but had read so much about.

Shifting from the TV to my computer, the screen I sat in front of, open-mouthed, had now shrunk. I suddenly knew the names, lives and gossip of all these people, splashing each other in their very small and crowded pool. I had nothing but an abstract grasp on what the stakes were in their daily lives, if there were any stakes, but sometimes it felt like I knew the minutiae of these far away, hungry media types more than I knew what was going on in my own family.

There was a person written about from that time whose activities I followed with an interest both passive and fervent. Suddenly, another room (frighteningly similar to the last) had been erected in the place of the dead photo account, another sinkhole.

The new water cooler of choice was Tumblr. I would regularly check in on this person’s Tumblr, and the Tumblr of his also much written about ex-girlfriend. Through his reblogs, I found in short order: his mother, his brother, his sister, and then later, the significant others of his siblings, and also his new girlfriend. All in the safely insular and discreetly public online circle I had come to covet and prefer for observation. A sheltered balcony equipped with binoculars. I followed their lives as passively as a ghost, uneasy only in my overeager consumption of the details they dished out, eating too many cookies from the snack table, making myself a little sick. I made their lives into my entertainment, but I had no control over them in any way and no one else knew how I was occupying myself. Was it harmful? Or was it just a little bit creepy? And was that, in some oblique way, harmful?

This all spanned something like four years. On and off, on and off, their memorised URLs flowing from my fingers like muscle memory. Six months ago, like any number of months ago, I found myself idly opening the door to my waiting room to see if anything had changed. His new girlfriend now fiancée now wife had put up a wedding video. Two minutes of a friend shakily recording other friends waving or mugging for the camera. The video contained no real spoken conversation, except those recorded from too far away to hear.

Somewhere in the two minutes I spot someone I think is Allison Williams from GIRLS and either Tegan or Sara of Tegan & Sara. They were mute, absently smiling for the camera before glancing away. I spot his mother, and his brother. I searched for his sister and her husband. There was a hazy familiarity to everyone’s faces. This, after I “inadvertently” see both he and his wife naked, save for their shoes, in a not candid/not exactly posed photo. People I had never met, people who have never even known of me, and yet here I had well-wishes from their loved ones on their wedding day, and a photograph where their genitalia was on unabashed display. Was this proper creepy? It was all public, after all. Consensual. They had put it out there themselves.

Had they considered being viewed by (someone like) me?

I took these two things – the nude photo and their wedding video – and held them within myself as best I could, for they were both nothing at all and largely unwieldy.  I tried to estimate their weight in my possession. How intimate my knowledge of their lives, how utterly non-existent my knowledge of anything of their real selves, their real lives. Can a perfect stranger become even less known to an observer? Can you consume others’ lives without connection and feel more hungry, more empty? It certainly felt that way as I rewatched the video to make sure that pretty brunette really was Allison Williams.

If I met these people in the living world where we both reside in our separate, far away rooms, and they offered their real, perfect imperfect and utterly private lives on a plate to me — if they offered themselves to me, whole and true, I would most likely balk and refuse. It would slip out, No, thank you. I really shouldn’t.

Suddenly, there would bloom a vulgarity in such directness, when I am so used to stories in the abstract, connection via an indirect approach, a sideways glance. When I am so used to scraps found as if by chance, by kismet, by serendipitous intervention. Pennies in the gutter. Digital trash. A projection on a screen in a room nobody knows I occupy. 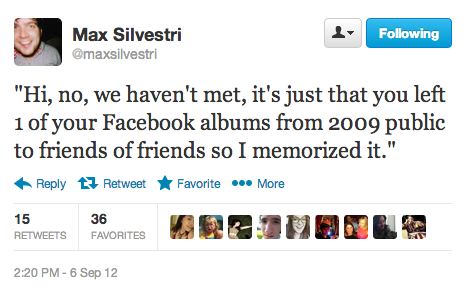 A Contracted Life is intended as a place to explore and examine the negative spaces in life — the things a person don’t, shouldn’t, wouldn’t, can’t do. A reflection of secret guilts and shames and how to reclaim these feelings and grow from them (or try to).

Syar S. Alia kind of wishes there was a less uncomfortable phrase for “online stalking”. She will politely insist she has never done this to you. She’s got a website and a bunch of online imprints you can ransack.

3 thoughts on “A Stranger Intimacy by Syar S. Alia”